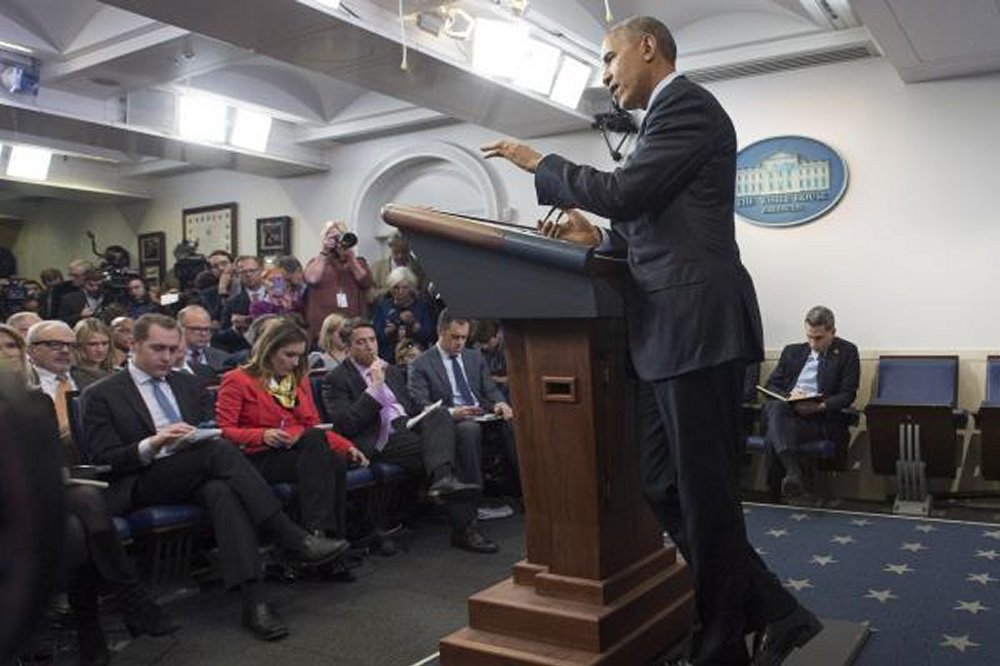 With about one month to go before he leaves office, President Barack Obama gave some exit interview-type advice to his successor Donald Trump: Don’t rely too heavily on executive orders.

In an interview with NPR’s Steve Inskeep on Thursday that aired in its entirety Monday on Morning Edition, Obama said it’s preferable to work with Congress.

“Keep in mind, though, that my strong preference has always been to legislate when I can get legislation done,” Obama said from the Cabinet Room in the White House. “In my first two years, I wasn’t relying on executive powers, because I had big majorities in the Congress and we were able to get bills done, get bills passed. And even after we lost the majorities in Congress, I bent over backwards consistently to try to find compromise and a legislative solution to some of the big problems that we’ve got — a classic example being immigration reform, where I held off for years in taking some of the executive actions that I ultimately took in pursuit of a bipartisan solution — one that, by the way, did pass through the Senate on a bipartisan basis with our help.”

In 2014, Obama signed executive orders that shielded millions living in the country illegally from deportation.

The 44th president is aware that the executive orders by the 45th president can undo his achievements over eight years in office.

“I think that he is entirely within his lawful power to do so,” Obama said.

But just as easily, Trump’s orders can also be wiped out.

“So my suggestion to the president-elect is, you know, going through the legislative process is always better, in part because it’s harder to undo,” he said.

“And that doesn’t mean, though, that he is not going to come in and look at the various agencies and see the rules we’ve passed and if he wants to reverse some of those rules, that’s part of the democratic process. That’s, you know, why I tell people to vote because it turns out elections mean something.”

And this time it meant a change in party.

“Well, it’s hard to assess because we know for example that Hillary [Clinton] won the popular vote by a sizable margin,” he said. “We know that there are a substantial number of voters out there who not only voted for me twice but currently support me who also voted for Donald Trump.

“So I think we have a scrambled political landscape right now. There are some things that we know are a challenge for Democrats — structural problems. For example, population distribution, oftentimes younger voters, minority voters, Democratic voters, are clustered in urban areas.”

He noted the Democrats’ strength is on the U.S. coasts.

“And so as a consequence you’ve got a situation where there’re not only entire states but also big chunks of states where, if we’re not showing up, if we’re not in there making an argument, then we’re going to lose,” he said. “And we can lose badly, and that’s what happened in this election.”

It might mean some fundamental changes in the way the Democratic Party operates, Obama said.

“Building from the ground up and communicating to state legislators and financing school board races and public utility commission races, and, you know, I am a proud Democrat, but I do think that we have a bias towards national issues and international issues, and as a consequence I think we’ve ceded too much territory,” he said.

And that means getting out its message properly.

“I don’t think there’s something wrong with the core argument that the Democratic Party has made for years,” he said. “And the reason we know that is because on the individual issues that Democrats talk about there’s strong support. For example, the minimum wage. In every survey across the country, people support a higher minimum wage. There are clearly, though, failures on our part to give people in rural areas or in exurban areas, a sense day-to-day that we’re fighting for them or connected to them.”

That includes perceptions of the Affordable Care Act, which became known as Obamacare.

“I think that on something like the Affordable Care Act, you have people who are benefiting right now from Obamacare who either don’t know it’s Obamacare or consider that as a given and then end up voting on Second Amendment rights,” Obama said. “So part of the reason it’s important to show up, and when I say show up, I don’t just mean during election time, but to be in there engaging and listening and being with people, is because it then builds trust and it gives you a better sense of how should you talk about issues in a way that feel salient and feel meaningful to people.”

Obamacare says he’s aware that the Affordable Care Act can, and may be, repealed.

“I could not be prouder of the fact that the uninsured rate has never been lower. That 20 million people have health insurance that we didn’t have before,” he said. “But I said when the bill passed that it wasn’t perfect. Over the course of six years of implementing a very complicated piece of legislation that affects one-sixth of the economy, that there were going to be things we learned that would allow us to improve it. And I don’t know how many times I’ve said to Republicans, both publicly and privately, in State of the Union speeches, in town halls around the country, that if they’re willing to engage and work with me, then we can identify ways to tweak and improve this system so that more people have health insurance and it works even better and it’s more stable, and build on the things that seemed to have worked.”

Obama also spoke about his future with the party.

“Well, I’m less likely to get involved in all the nuts and bolts of electioneering,” he said. “In that realm, I’m much more likely to just give advice. What I am interested in is just developing a whole new generation of talent. There are such incredible young people who not only worked on my campaign, but I’ve seen in advocacy groups, I’ve seen passionate about issues like climate change or conservation, criminal justice reform, campaigns for a livable wage, or health insurance, and making sure that whatever resources, credibility, spotlight that I can bring to help them rise up.”

“That’s part of what makes me optimistic about our future because I know those young people are out there ready to lead, and when they start moving into more and more positions of authority, then I think the issues that I care most deeply about are going to be well served.”

But before getting back to work, it will be time to relax.

“I need some sleep. And I’ve promised Michelle a nice vacation,” said. “My girls are getting old enough now where I’m clinging to those very last moments before they are out of the house.”

US extends sanctions against Russia over Ukraine – Treasury statement