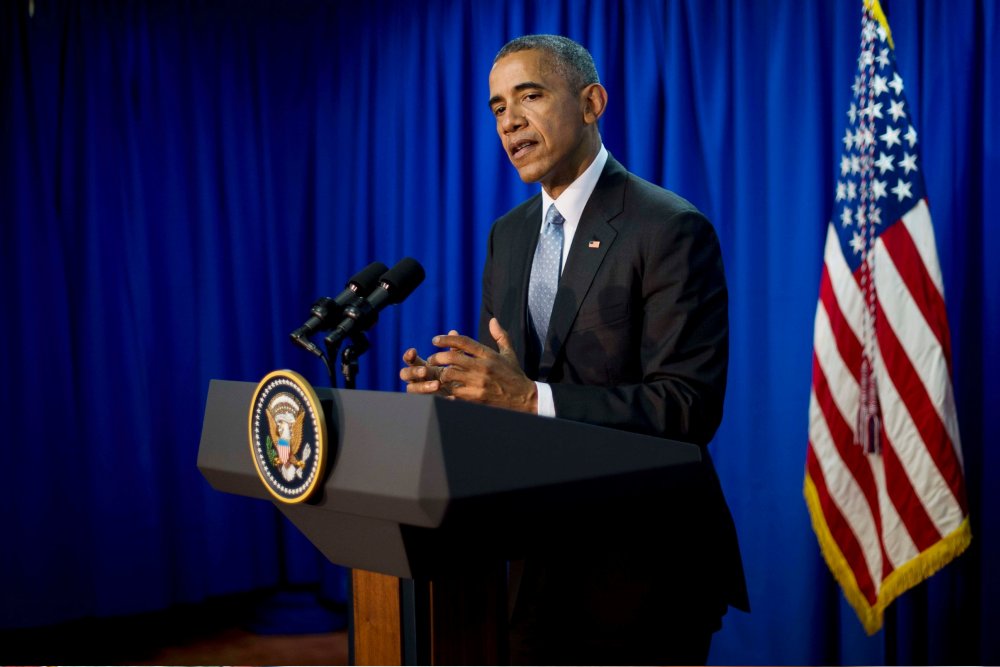 President Barack Obama on Friday gave his final press conference of 2016 — an event at which he touted the biggest successes of his eight-year administration and lamented ongoing challenges that he said require more work to do.

“This is the most wonderful press conference of the year,” he said at the start. “I’ve got a list of who’s been naughty and nice to call on.”

The president started Friday’s year-end news conference by acknowledging some of his presidency’s greatest successes — starting with the Affordable Care Act, which he said has given millions of Americans health care coverage they would not have otherwise had.

Obama also included in his highlights the reduction of U.S. forces in Iraq and Afghanistan — from 180,000 down to about 15,000.– as well as the Iran nuclear agreement and reestablishment of diplomatic relations with Cuba.

“By so many measures, our country is stronger and more prosperous than when we started,” Obama said. “You cannot argue that we are not better off. We are.”

The president also acknowledged the May 2012 operation that killed the mastermind of the devastating Sept. 11, 2001, attacks on the United States and the Paris climate change agreement that he said “very well may save this planet for our kids.”

The challenges that remain, Obama said, are seen and felt around the world — such as escalating gun violence in the United States, homelessness and famine worldwide, and emerging foreign policy difficulties.

Obama said a broader cease-fire is needed to secure peace in Syria, and that President Bashar Assad’s chief ally, Russia, has been and continues to be a major belligerent force in the matter.

“Regretfully, but unsurprisingly, Russia has continued to block aid to Syria,” he said. “The Assad regime cannot slaughter its way to legitimacy.

“The world should not be fooled.”

Obama said the Syrian conflict is one of the most difficult issues he has faced as president — with the country in its sixth year of civil war, tens of thousands of people suffering on a daily basis, and the Islamic State continuing to exercise influence in the region.

The president said it’s something he has felt politically responsible for.

“I always feel responsible. I felt responsible when kids were being shot by snipers,” he said. “I feel responsible for murder and slaughter that’s taken place in South Sudan that’s not being reported on. … There are places around the world where horrible things are happening. And because of my office, because I’m president of the United States, I feel responsible.

“There’s not a moment during the course of this presidency where I haven’t felt some responsibility.”

While Obama addressed Syria, a member of the press became ill and was attended to by the White House medical staff.

On Russia’s Hand in U.S. Election

Many of the questions posed to the president by reporters, unsurprisingly, inquired about the conclusion by some U.S. intelligence analysts that Putin himself personally approved digital criminal interference by Russian actors in the American presidential election.

This week, the CIA said Putin greenlighted the hacking of email servers at the Democratic National Committee earlier this year — an act that revealed sensitive emails about the party and potentially hindered the Democrats’ White House bid.

“The Russians were responsible for hacking the DNC and, as a consequence, it’s important to review elements of that and prevent that interference in the future,” he said, adding that he believes his administration handled the issue in a nonpartisan fashion.

Nonetheless, Obama said the political fallout that resulted from the hacking and the posting some DNC emails on WikiLeaks was worrisome.

“What is it about our political system that makes us vulnerable? This was not a complicated espionage scheme,” the president said. “It just took off — and that concerns me.”

Obama stressed that his administration has tried to take a nonpartisan approach to a “hyperpartisan” atmosphere that preceded and followed the election of Donald Trump. In particular, he voiced his opinion that Democratic nominee Hillary Clinton didn’t get a fair shake in the campaign.

“It was a fascinating election and I’m sure there will be a lot of books written about it,” he said. “I don’t think she was treated fairly during the election. The coverage of her and the issues was troubling.”

When asked whether he believes Trump will effectively give Russia a pass on their involvement when he takes office, Obama said that remains to be seen.

“When Donald Trump takes the oath of office and is sworn-in as the 45th president of the United States, he will have a different set of responsibilities,” he said.

“There are a couple issues that ]Russia] raises. Number one is just the constant challenge we are going to have with cybersecurity,” he said. “We are a digitized culture and there is hacking going on every single day.

“This is why for the last eight years I have been obsessed with how we continually upgrade our cybersecurity systems.”

On Questions of Election Integrity

“I can assure the public that there was not the kind of tampering with the voting process that was our concern,” Obama said. “The votes that were cast were counted. They were counted appropriately. We have not seen evidence of machines being tampered with. That I can assure.”

“We paid a lot of attention to it, we worked with state officials, etc., and we feel confident that didn’t occur.”

The president was asked if he believed electoral reform is needed, particularly after the Democratic Party lost the White House despite winning the popular vote for the second time in just 16 years.

Electoral College voters are scheduled to meet on Monday to certify their votes, but some have asked for an intelligence briefing first, regarding Russia’s interference. Some observers believe the electoral voters should consider breaking with tradition and bank their ballot for whichever candidate they see fit.

It’s an issue Obama did not delve into.

“I’m not going to wade into that issue because it’s the American people’s job to decide my successor, it’s not my job to decide my successor,” he said. “More importantly, the candidates themselves talked about their beliefs and their vision for America. I think the president-elect has been very specific about what he cares about. So, it’s not in my hands now. It’s up to them.

“The Electoral College is a carryover from an earlier vision of how our federal government was going to work.

“The truth of the matter is, if we have a strong message, if we’re speaking to what the American people care about, typically the popular vote and the electoral college vote will align,” Obama said.

“Everybody has raised legitimate questions and legitimate concerns. I do hope we all just take some time, take a breath — this is what I’m going to advise Democrats — to just reflect a little bit more about how can we get to a place where people are focused on working together?”

After Friday’s press gathering, Obama left for a three-week holiday vacation in Hawaii.