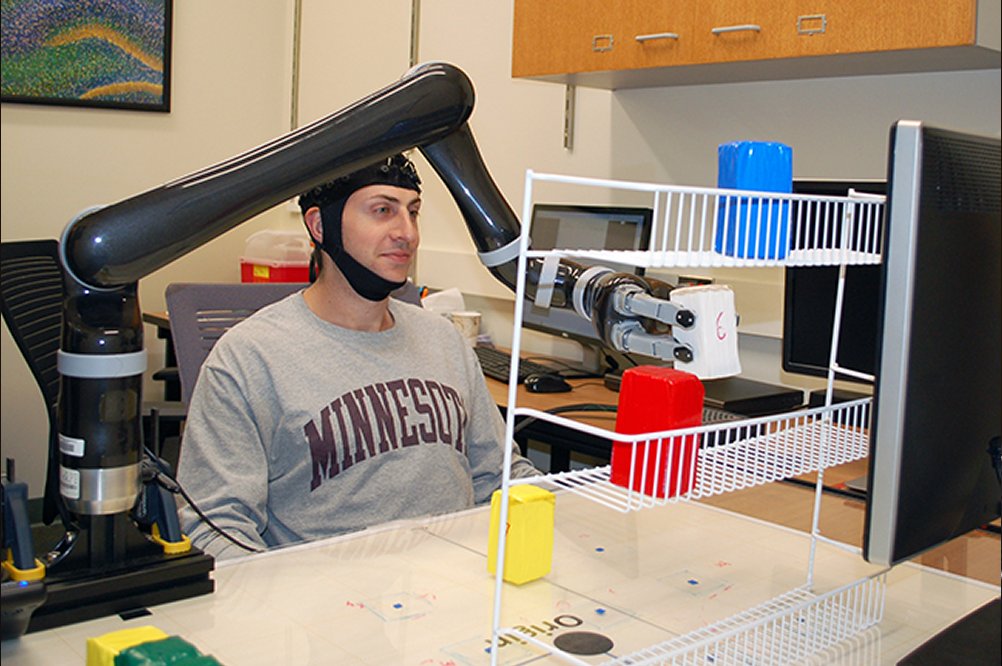 “This is the first time in the world that people can operate a robotic arm to reach and grasp objects in a complex 3D environment using only their thoughts without a brain implant,” lead researcher Bin He, a biomedical engineering professor at the University of Minnesota, said in a news release. “Just by imagining moving their arms, they were able to move the robotic arm.”

The technology relies on a high-tech EEG, or electroencephalography, cap. The cap uses 64 electrodes to pick up brain signals and translate them into action. Machine learning helps the cap field the relevant signals and correctly interpret them.

The technology doesn’t do all the work on its own. Users must practice to forge a strong connection between mind and arm. First, participants practiced controlling a virtual cursor on a computer screen. Next, users made the robotic arm pick up objects in a single, fixed location on a table. Finally, participants learned to grab objects from random locations and place them on a neighboring shelf — using only their mind.

“This is exciting as all subjects accomplished the tasks using a completely noninvasive technique,” He said. “We see a big potential for this research to help people who are paralyzed or have neurodegenerative diseases to become more independent without a need for surgical implants.”

In 2013, He and his colleagues successfully trained study participants to fly a remote control helicopter using an EEG cap.

“Three years ago, we weren’t sure moving a more complex robotic arm to grasp and move objects using this brain-computer interface technology could even be achieved,” He said. “We’re happily surprised that it worked with a high success rate and in a group of people.”

Google welcomes the arrival of winter — and summer — with new Doodles

Samsung Note 7 to be ‘killed’ by software update