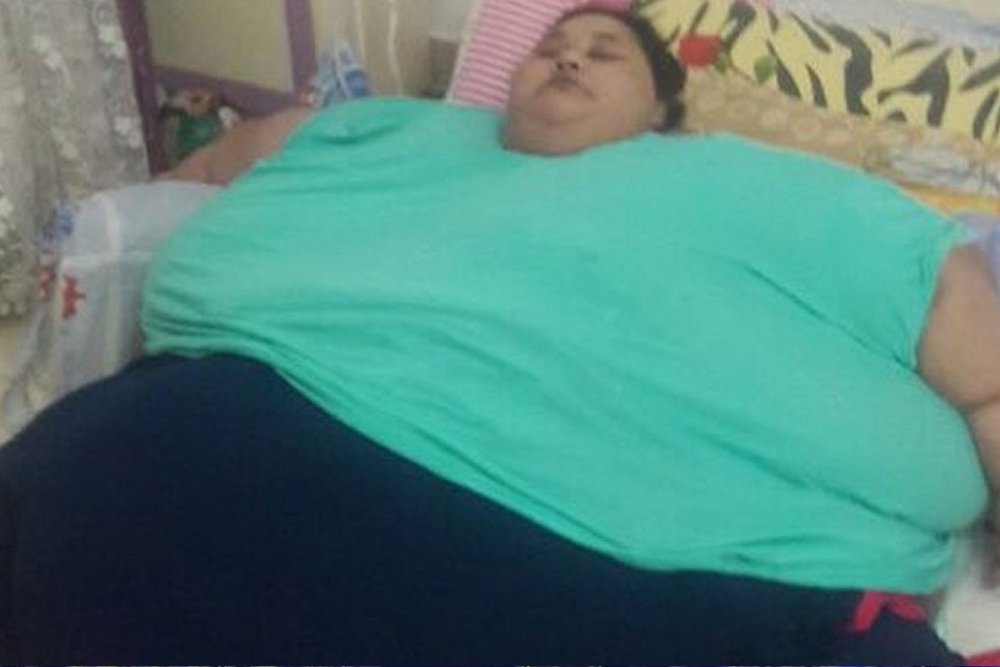 Eman Ahmed, from Egypt, is believed to be the world’s heaviest woman. According to her family, she weighs 1,102 pounds (500 kg).

“Eman didn’t live life as everyone does,” Shaimaa Ahmed, Eman’s younger sister and carer, tells CNN. “She didn’t enjoy her childhood or youth. She’s been battling with her illness for 36 years.”

According to her family, Eman has barely left her bedroom in over two decades. Unable to move or communicate, she spends her days trapped inside her family home, staring at the ceiling.

A stroke two years ago impaired her speech and mobility, so the last couple of years have been particularly difficult, Eman’s sister says.

However, thanks to a social media campaign initiated by Shaimaa, the family’s situation is now looking a little more hopeful.
Publicity surrounding Eman’s plight caught the attention of eminent Mumbai-based surgeon, Dr. Muffazal Lakdawala, who set up a fundraising initiative in order to fly Eman to India.
“She is battling with her life every single day,” Dr. Lakdawala told CNN. He says that as things stand, how long she lives is anybody’s guess.
“Right now she is like a living bombshell, which could blow up on her any moment.”
According to Guinness World Records, the world’s heaviest living woman is Pauline Potter from the United States, who weighs 643 pounds (291.6 kg.)
She always had hope
Eman’s family says she’s suffered from thyroid problems since she was a child.
When she was born, she reportedly weighed 11 pounds (5 kg), and by the age of 11, she’d started to put on weight.
By fifth grade she’d stopped going to school because her thyroid problems were making her lethargic.
Her legs were also unable to carry her weight; she had use her knees to move around because she couldn’t stand.
“She would use her knees to reach the car in the parking lot and we would drive her across Alexandria and the coast without leaving the car,” says her sister Shaimaa.
“She wasn’t able to walk properly and there was no wheelchair to fit her size.”
Despite her tragic circumstances, according to her sister, Eman always remained patient and funny.
“She has always had hope that she would lose weight and get better,” Shaimaa says.
But a couple of years ago, things changed. Eman’s weight went up to about 660 pounds (300 kg) so she put herself on a strict diet.
“Suddenly her cholesterol levels went up and she lost consciousness,” says Shaimaa.
It took time to find a hospital that would run an MRI on someone of her size, and when they eventually did, she was diagnosed as having had a stroke.
According to Shaimaa, things went downhill from there.
The stroke reduced Eman’s already limited ability to move and speak, and her family had to start taking care of all her needs.
They used hand gestures when they couldn’t understand each other and her body started retaining water; her weight bloated to more than 1,000 pounds.
The doctors the family consulted seemed unable to get to the root of the problem.
Shaimaa says Eman’s positivity and cheerfulness fell away.
Obstacles
The opportunity for Eman to be operated on in India is a ray of hope in an otherwise bleak scenario for the 36-year-old and her family.
They were met with roadblocks almost immediately. Eman’s visa application was initially denied because she was unable to go to the Indian embassy in person.
Dr. Lakdawala wrote a letter explaining that Eman had barely left her room in decades and pleaded with them to reconsider. When he was told it was still impossible, he tweeted India’s external affairs minister Sushma Swaraj. “I was left with no other option,” he says.
He was pleasantly surprised by her response; within two hours she had written back agreeing to help expedite the visa on humanitarian grounds.
Organizing transport was another priority, but that presented its own complications, because access to planes is difficult for someone of Eman’s size.
“Air ambulances normally have a bigger door because they allow stretchers,” says Dr. Lakdawala, but as Eman doesn’t fit on a normal stretcher, he’s had to talk to individual airlines about their capacity to accommodate her. Additionally, Eman is unable to sit in a seat, so the team have to find a flight where she can lie horizontally.
They’re also taking into account that, coming from a Muslim country, she might be uncomfortable being cared for by men, so they’ve put together an all-female team.
“I will be the only male when it eventually comes to operating on her,” says Dr Lakdawala.
As Eman is a “high risk” patient, Dr. Lakdawala says they will be taking “all precautions.” And if the operation does go ahead and is a success, Eman will have to stay in Mumbai for a number of months afterward so she can be monitored.
To get her to a stage where she can bend and weighs under 220 pounds (100kg), Dr. Lakdawala says it will take two operations and at least three and half years.
Shaimaa collected the visas Wednesday and says she’s optimistic about the future.
“I know the doctor will exert his best effort.”
CNN
Related Topics:Dr. Muffazal LakdawalaEman AhmedHealth
Up Next