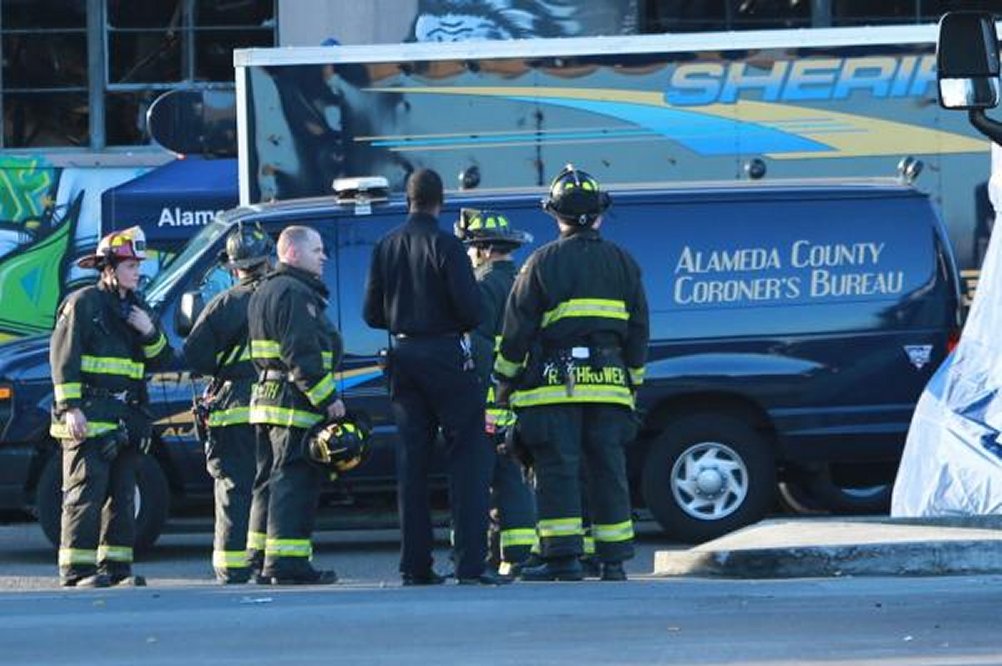 Authorities announced Sunday morning that 24 bodies have been recovered from the Oakland warehouse and arts collective fire.

The death toll had stood at nine on Saturday night since the fire started in the early morning.

Alameda County Sheriff Sgt. Ray Kelly said 20 percent of the building had been searched in the past 12 hours and he expected the death toll to rise.

Late Saturday night, Kelly said it could take at least 48 hours to determine the number of casualties because of remaining danger.

“We have to move slow and judiciously,” Kelly said. “We know there are bodies in there that we cannot get to. … We don’t know how many people were inside when this happened.”

On Saturday night, nine bodies recovered were sent to the coroner’s office for identification.

The fire broke out around 11:30 p.m. Friday in a warehouse known as the “Ghost Ship” used by an artist collective. They hosted the party with musical acts Friday night.

Twenty-five people originally unaccounted for — by people who escaped the fire or believe they knew someone who was there, Oakland Fire Chief Teresa Deloach Reed said.

A tractor, bulldozers and crane were being used to get into the building.

“We’re going to have to cut a hole through the building. It’s blocked at the entrance so we have to gain access on the other side,” Kelly said. “It’s very twisted debris in there. There are wires and beams and wood. It’s all fallen in on itself. We’re thinking about bringing in cadaver dogs and robots to get into all the crevices.”

Fire department officials said about 50 people were believed to be inside the building at the time of the blaze. Kelly said they mostly were in their 20s and 30s, including visitors from other countries.

“It’s just a task to get through the front door with all the debris and wreckage that’s there,” Kelly said. “We’re slowly making our way in, and we have to go systematically because any misstep on the part of our people could mean they get injured or fall through a floor or have something fall on top of them.”

Reed said most of the dead were found on the second floor of the building.

It took about five hours to extinguish the blaze. Reed noted the building did not appear to have sprinklers or a clear exit path. The cause of the fire is not known.

Calling it a “terrible tragedy,” Mayor Libby Schaaf said she had met with a roomful of people still searching for loved ones.

“It was painful to tell them that it will take a considerable amount of time” to determine the number of victims, Schaaf said. “Our focus right now is on the victims and their families and ensuring that we have a full accounting for everyone who was impacted by this tragedy.”

Firefighters were hampered getting to the second floor.

“One of the issues was that leading up to the second floor there was only one way up and down,” Reed told reporters. “It was my understanding that the stairwell was kind of makeshift, that they put it together with pallets.”

An electronic-music party called Golden Donna 100% Silk was to play Friday night at the warehouse.

Freelance journalist Sam Lefebvre told the building is a “sort of live/work art space with a lot of old decorations and furniture.”

Bob Mulé told CNN more than 20 people lived in the warehouse as a “collective artists’ community,” paid rent and were all involved in the creation of the space.

Mule said he had gone upstairs to listen to some music in a “very tame setting.” He went downstairs to work on a painting and he smelled smoke.

After noticing flames, Mulé went to get a fire extinguisher, which he was unable to use.

More than 40 people attended a vigil Saturday night at Chapel of the Chimes in Oakland.

Trump threatens 35% tariff as ‘retribution’ for companies that offshore jobs